Skip to the beginning of the images gallery
Extensive product description
The 20 French franc - Ange is a historic gold coin struck in 21,6 carats gold with a pure gold content of 5,8 grams, and at that time together with the 20 BEF, 20 CHF & 20 ITL to the proverbial euro-for-the- Euro club '. The 20 FF - Ange is a popular currency in both numismats and investors and is an affordable classic on the collecting market.
20 French francs - Angel
The 20 French Francs - Angel currency appeared for the first time in 1791 as a result of the French Revolution in 1789. On the front of this coin there's an angelic figure writing down the constitution of the new post-revolutionary France.
Soon the rumor was that the 20 FF - Angel was a "lucky gem" because the coin designer, Augustine Dupré, - according to tradition - would have been saved of death by the guillotine during the terror thanks to the Ange coin which he carried in bag. It would have prevented the guillotine knife from falling down during his execution. How unlikely and unbelievable as it should; the story lead its own life and suddenly it was a widely accepted fact that the 20 FF - Angel brought happiness to who owned it. Napoleon's defeat at Waterloo, for example, was dedicated to the loss of the golden Ange coin that had succeeded him in earlier missions.
Only after the fall of Napoleon III Bonaparte and the second French Empire in 1870, the Ange coin was introduced. The new Third French Republic was well-known in the then revolutionary design of the 20 FF - Angel and brought it back into circulation until 1898.
The legend of the 'lucky mint', however, continued to live. For example, many French soldiers carried a Ange currency as a Talisman during WW I. During WW II, Herman Goering, the head of the German Luftwaffe, was so obsessed with the legend of the French Angel coins that he confiscated as much batches of Angel coins as he possibly could and handed them out to his German combat pilots. This guaranteed succes during battle.

Purity & weight
The gold 20 French francs - Angel has a purity of 900/1.000 (21,6 carats) and a net gold content of 5,8 grams of gold.
Design of the golden 20 French francs - Angel
On the front of the 20 French francs - Angel is the image of an angelic figure describing the new French Constitution. Left and right of this figure you respectively see a "fascis" (Latin for rowing bundle) and a rooster . The fascis is an ancient Roman symbol that indicated the authority of senior magistrates. In modern iconography, however, this symbol stands for justice and unity. The rooster, the Coq Gaulois, symbolizes France. At the bottom of the coin you'll see the name 'Duprez'; the designer of the french Ange. At the top are the words 'République française'.
On the back of the coin you see the famous words 'Liberté, Égalité, Fraternité'; The devils of France that were introduced during the French Revolution. In the middle of the coin you see a crown containing the nominal value of the coin and the year of issue. The letter at the bottom of the coin indicates the place where the coin was struck.
Buying a golden 20 French francs - Angel
The 20 FF - Angel and other gold coins can serve as a purchase of physical gold. Gold coins are not taxed because they are considered monetary gold. And while all the gold coins offered by Argentor have been tested for authenticity, they are not delivered with a certificate of authenticity. That, unlike gold bars.
Because golden 20 French francs coins are no longer minted, we depend on the amount of coins we can buy over the counter or from other traders for our stock. Therefore, please contact us before you placing an order > 20 coins through the webshop.
Selling a golden 20 French francs - Angel
You are more than welcome in our office to sell your 20 French francs - Angel coin(s). You needn't make an appointment to do so.
Our buying prices are adapted every minute to the actuel gold rate and will only be hedged once you present the coin(s) at the counter in our office. You can easily check our live buying prices on this page.
Product properties
Related Products 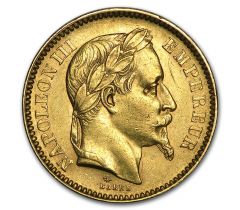 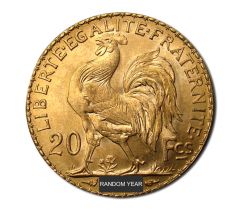 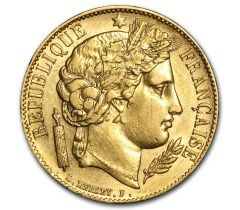 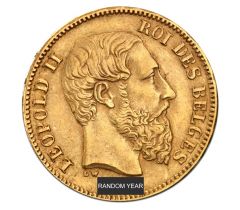 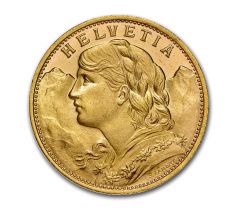 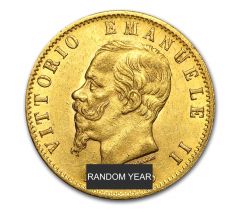