Skip to the beginning of the images gallery
Extensive product description
The golden Chinese Panda is issued annually by the China Gold Coin Incorporation. The gold Panda has a purity of 99,9% (24 carats) and contains 3 grams of gold. Because the design changes every year, the Panda is a popular coin amidst investors as well as collectors.
Chinese Panda
The gold Panda is issued annually by the China Gold Coin Incorporation and was introduced in 1982 by the Chinese government. Up until 2016 the Panda was minted according to the Imperial Standard System. The weight of these original Panda coins is expressed in troy ounce: 1 troy ounce, 1/2 troy ounce, 1/4 troy ounce, 1/10 troy ounce & 1/2 troy ounce, which resulted in following weights: 31,10 grams, 15,55 grams, 7,775 grams, 3,11 grams & 1,55 grams.
From 2016 onwards, production was switched to the metric system in order to make the coins more appealing to international investors and collectors. From then on, the coins were minted in following weights: 30 grams, 15 grams, 8 grams, 3 grams & 1 gram.
Purity & weight
Gold Chinese Panda coins minted before 2016 have a purity of 999/1.000 (24 carats) and contain 3,11 grams (1/10 troy ounce) of gold. Panda coins minted after 2016 still have a purity of 999/1.000 (24 carats), but only contain 3 grams of gold.
Design of the gold Panda
The obverse shows The Hall of Prayer for Good Harvests at the Temple of Heaven in Beijing. Around the image of the temple you can see "zhōng huá rén mín gōng guó" in Chinese characters, which means "People's Republic of China". At the bottom you can find the year of mintage of the coin.
The reverse shows the image of a giant panda. The design of this image changes annually, with the exception of the coins minted in 2002. In 2001 the Chinese Mint decided to no longer modify the design of the Panda coin, which resulted in the 2002 coins having the same design as the ones minted in 2001. Many collectors were disappointed about this decision, so it didn't take long for the complaints and pleas to arrive at the Mint. From 2003 on, the Mint decided to change the design again every year.
Also on the reserve of the coin, you will find the weight of the coin. Coins minted before 2016 will have the weight expressed in troy ounce, after 2016 the weight will be mentioned in grams. Besides that the reverse also shows the purity of the gold, which remained unchanged throughout the years, and the face value of the coin. The latter was, by the way, also changed through the course of years. From 1982 until 2000 the gold Panda coins had a face value of 100 yuan (1 troy ounce), 50 yuan (1/2 troy ounce), 25 yuan (1/4 troy ounce), 10 yuan (1/10 troy ounce) & 5 yuan (1/20 troy ounce). From 2001 on the face value was raised to 500 yuan, 200 yuan, 100 yuan, 50 yuan & 20 yuan respectively.
Buying a golden Chinese Panda - 3 grams
The golden Panda and other gold coins can serve as a purchase of physical gold. Gold coins are not taxed because they are considered monetary gold. And while all the gold coins offered by Argentor have been tested for authenticity, they are not delivered with a certificate of authenticity. That, unlike gold bars.
Even though all gold coins sold by Argentor are tested for their authenticity, they don't come with a certificate as opposed to gold bars.
Selling a golden Chinese Panda - 3 grams
You are more than welcome in our office to sell your golden Chinese Panda coin(s). You needn't make an appointment to do so.
You can easily check our live buying prices on this page. These prices are adapted every minute and will only be hedged once you present the coin(s) in our office.
Product properties
Related Products 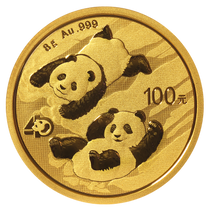 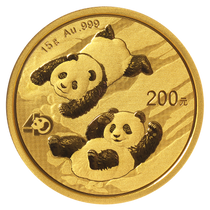 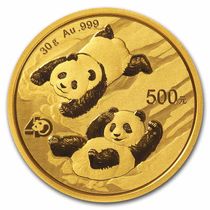